Water continues to mold and shape this rocky planet.

Water is a foreign invader to this world.

It's from space.It came here because gravity called it here, and it was subjected to the influence of gravity. **

Since that time, it has conquered the world.

Water changes and forms and molds it as easily as a child plays with a toy, despite its foreign origin.

The world was made to be shaped by water and gravity, and is constantly shaped by these two forces acting together.

God uses these two the way a painter uses color.

Instead of painting with pigment, He created and paints with real, actual water.

The water itself is the equivalent of color.

How much greater an artist is God compared to man.

How humbled is man by the art of God. He paints these stones in water over time to shape them, and He does this solely to please Himself.

How many art projects He has on this earth that man has not discovered or seen.

He does not paint hidden fields with flowers for anyone to see and behold and approve or disapprove of.

He paints them to please His own eyes with the work of His Hands.

How many unnoticed or undiscovered art projects He has.

Most of them are unseen. Infinite amounts are passed by people.

He alone enjoys them and this is very satisfying to Him. He is constantly building up and breaking and shaping and growing, with tools of gravity and water and light and matter.

The world sees art vastly different than He does. For men, art is "stopping." Art is freezing a moment in time, capturing it. 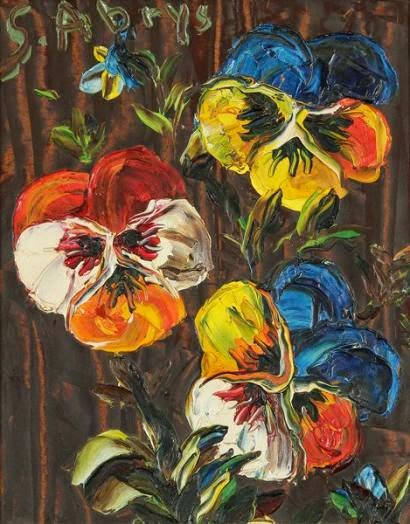 For God, art is the constant change. It is the change itself.

The canvas never rests. The movement and constant change of the subjects, from the moment of it's creation to it's end, the process, the process that never stops and never rests and effects every thing, is what is the art.

For Him, not only is the growing of flowers on the field on the side of a mountain is art, but so to is the change that occurs before, during and after that mountain erupts and lava burns up the flowers and covers the earth with rock.

Because He did it.

It is not a bad thing but yet another of His constant art.

But it is all His art.

It is the conversion, the changes themselves that He is constantly after and enjoying, to satisfy, ultimately, no one but Himself and His own artistic sensibilities.

**" Earth got most of its water from asteroid impacts nearly 4.6 billion years ago, shortly after the solar system first took shape, a new study suggests."

Written by Tiger Boldradish
Posted by Bold Radish at 2:30 PM

New comments are not allowed.